I am currently trying to apply region growing to 3D T2 MRI scans which I have been given, to segment the end of the small intenstine (i.e. the terminal ileum). I am using several features from SimpleITK. The problem is, the output of my region growing is very inaccurate and, after a lot of tinkering, I am unsure what to do.

I have been given:

I understand that, for region growing, you must provide seed points within the area of interest. I use the coordinates of the terminal ileum, which were given to me, as seed points. There are many of these points, typically around 1200 in total for one case. I am currently using scans/data which are only in the axial modality.

I am using SimpleITK’s ConnectedThreshold to try and accomplish this region growing task (please see the bottom of this question for my code). For the upper and lower thresholds of ConnectedThreshold, I looked at what the general intensities were (within the region of interest) using ITKSnap. Below, I have provided one example case: 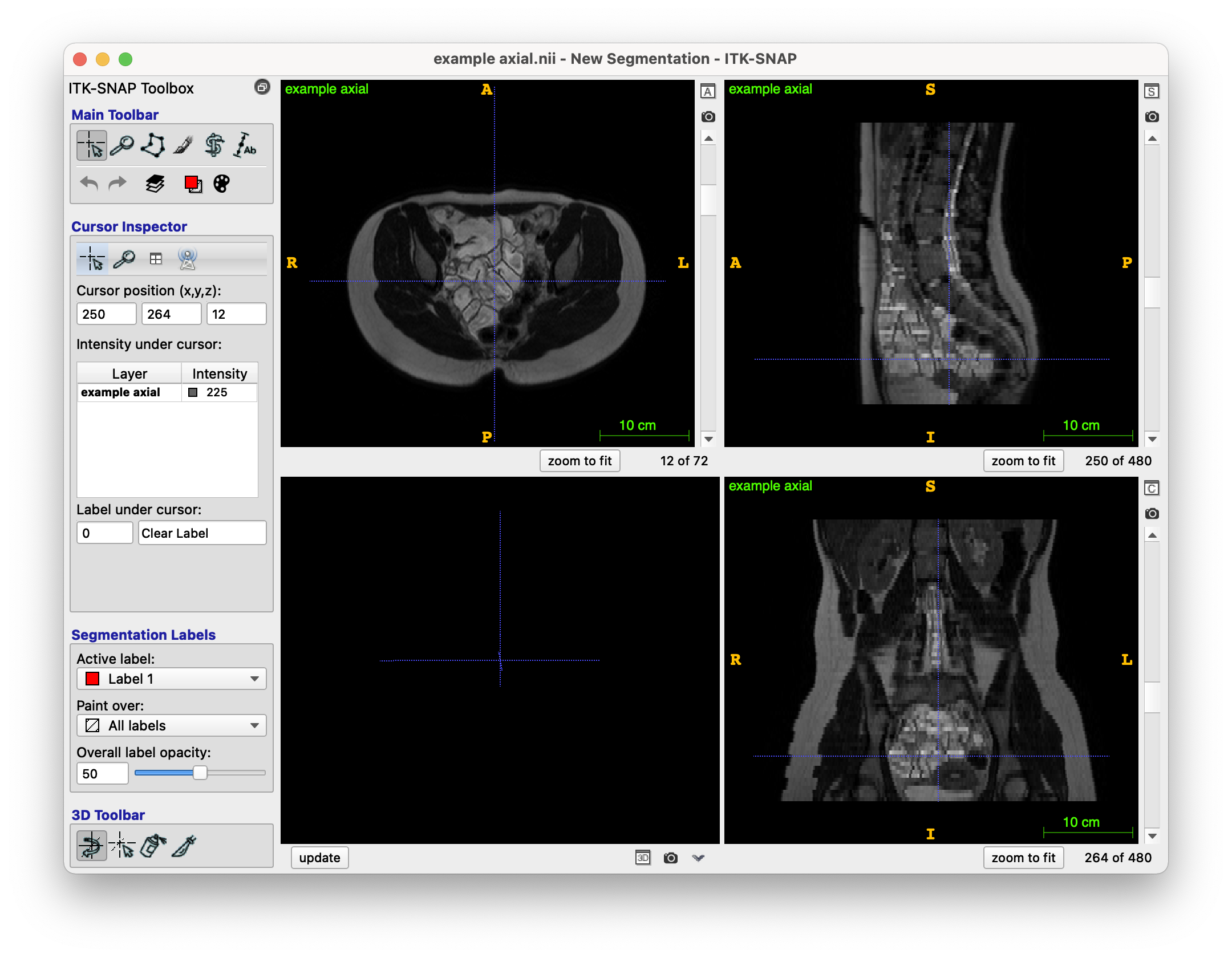 The provided model segmentation example for this case looks like this (NIfTI file format), this represents the model result which I am attempting to get via my region growing: 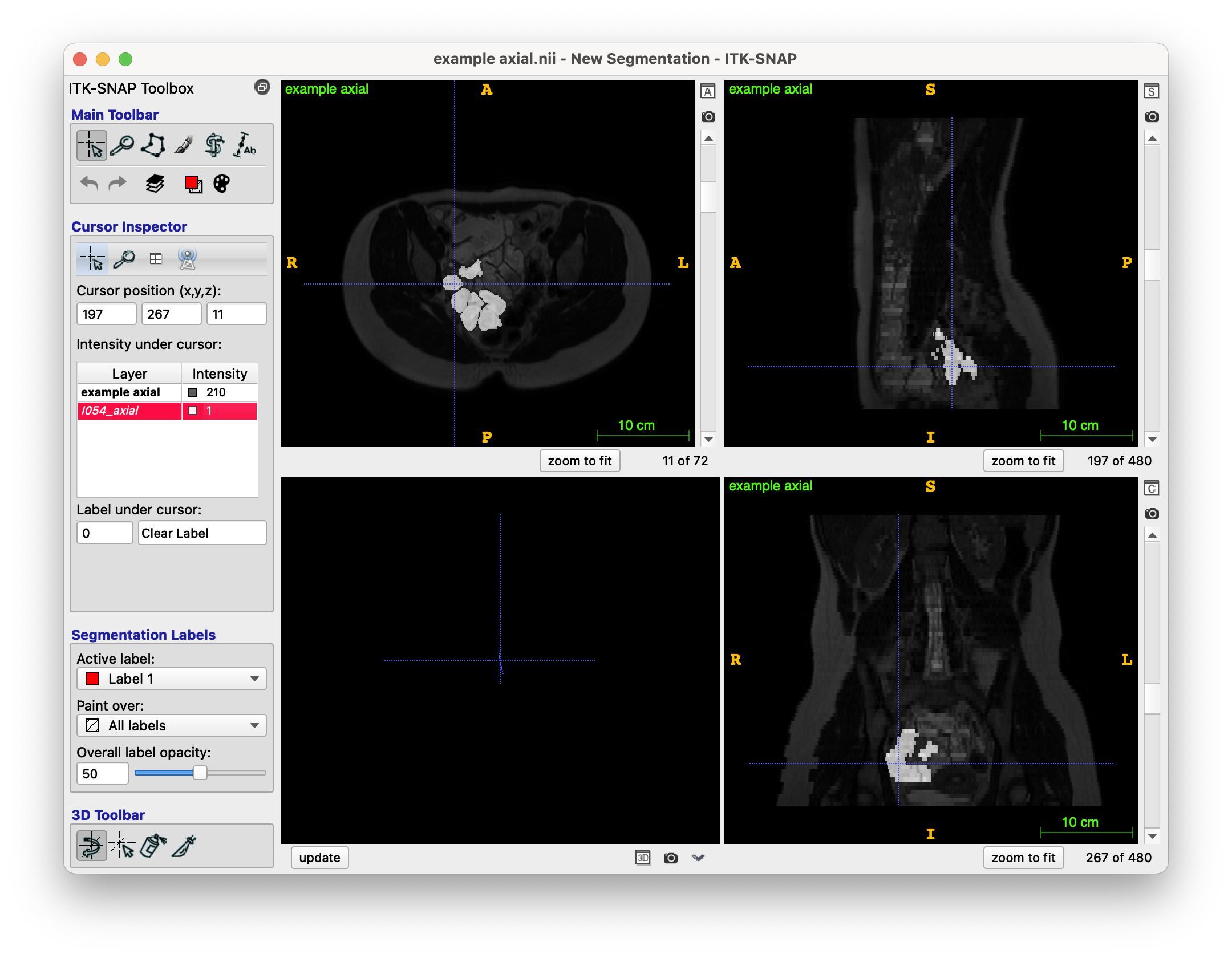 (Please note I have put the segmentation as an overlay to the original image).

The centreline coordinates (and thus, the seed points) for this case are as follows:

And finally, my (unfortunately terrible) region growing output is as follows (overlayed on top of the original image): 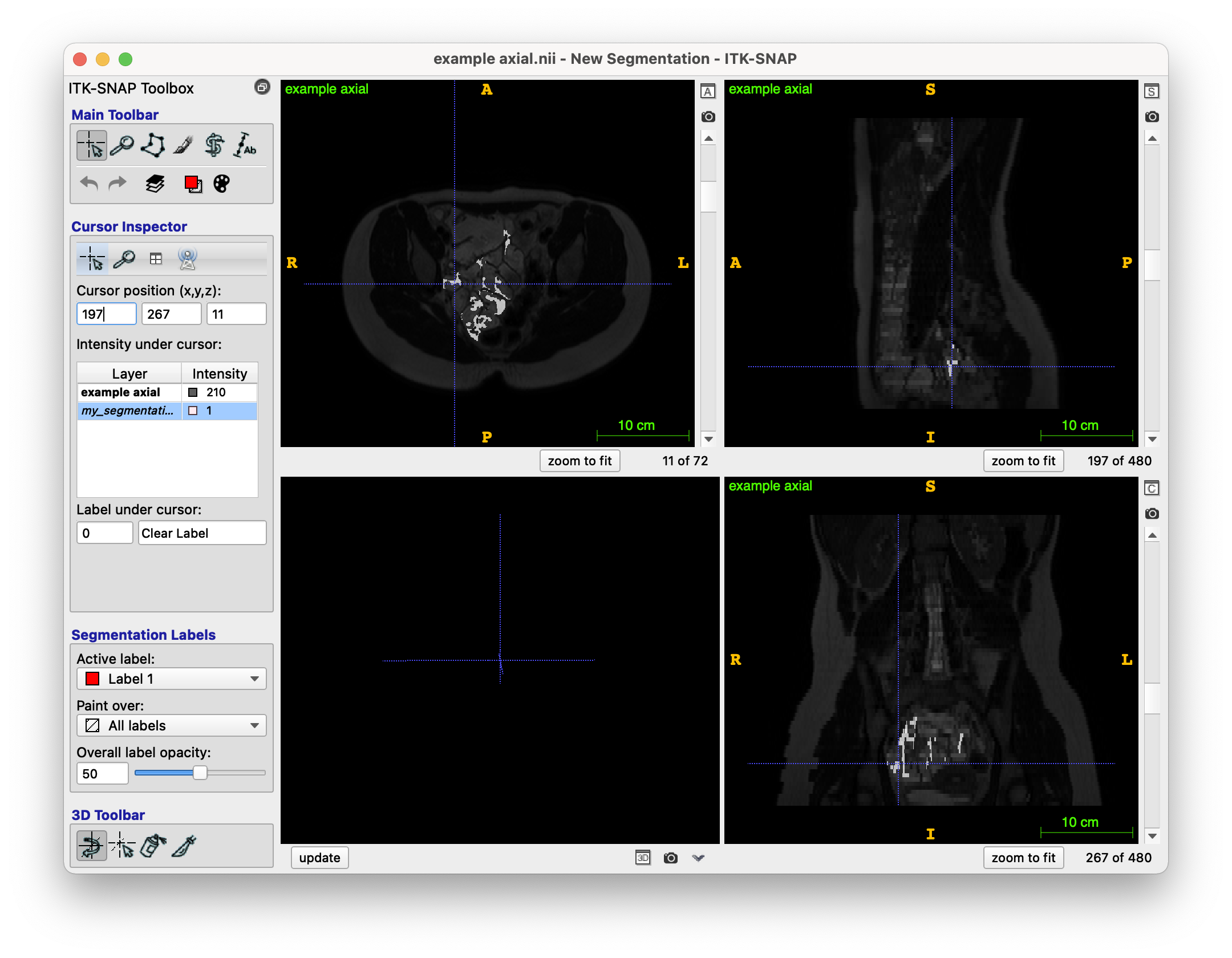 As you can see, it is very very different to the model segmentation seen above. I feel that the main problems are:

I am unsure what to do as I have tried quite a few things. I feel that the data is somewhat difficult to work with, but I do feel it is possible to reach the model example result somehow. Could anyone point me in a direction they feel may be worth exploring, or any tools which could aid me?

Any help is much appreciated.

My code for region growing is as follows, with a few steps before:

The reason why I randomly add and subtract 0.1 from the lower and upper thresholds (respectively) is due to how I’ve seen (from trial and error) that the closer the threshold gap, the smaller the generated area is. The average area (number of 1’s in the image) of a ‘model’ segmentation (from my calculations) is around 12000. However, I understand that, the way which I am doing it, is quite unintuitive - how else could I find the best thresholds to use? The segmented region is very incorrect - even though I have provided so many seed points. I have also tried truncating the seed points - yet this hasn’t helped. Please note the following:

The end of the console output is as follows:

Did you look at other region growing filters? For example, ConfidenceConnected.

Do your seed points form a centerline of the intestine? If so you could use that: limit the segmentation to stay within e.g. 1cm of the centerline.

I also feel that TubeTK can be somehow helpful here. @Stephen_Aylward might have more concrete ideas.

Using the ConnectedThreshold method will work in very constrained settings (rarely on clinical images), primarily because the thresholds need to be directly set by the user. Possibly the ConfidenceConnected will do better, the user is indirectly setting the thresholds and relying more on the data. This Jupyter notebook illustrates how to work with the region growing filters.

Some observations with respect to the input:

Before going down the coding path, highly recommend exploring the segmentation algorithms available in 3D Slicer. That will allow you to cover many more options very quickly without the need to implement something specific in code.

Thank you for the reply! I wanted to ask: would having lots of seed points cause the segmentation to be less accurate? Since this is a 3D image, the points span across different slices. In terms of the goal I am trying to achieve, would it matter that a human operator is unable to provide several seed points (if I already have the points)?

Hi Dženan, thanks for the ideas! How could I limit the segmentation to stay within 1cm of the centerline? Does SimpleITK provide any feature for this?

If you can rasterize the centerline as one pixel wide line, you could use SignedDistanceField to compute distances to it in the image. You could take that distance into account somehow, for example by thresholding it at 10.0 mm away.

But I don’t know if rasterization can be done using SimpleITK.

Before going down the coding path, highly recommend exploring the segmentation algorithms available in 3D Slicer. That will allow you to cover many more options very quickly without the need to implement something specific in code.

I fully agree. The best is to first explore what approaches work well, use manual methods (paint, draw, threshold, import models, etc.) to define some inputs and use semi-automatic methods (Grow from seeds, Fast marching, Watershed, etc.) to improve the results. If you have a good semi-automatic workflow then you can automate the trivial manual steps. You can go even further and use the segmentation to train a neural network, which may be able to provide segmentations fully automatically.

Regarding your specific segmentation task. There is no such thing as a perfect segmentation, so it would be very important to know what is the clinical purpose of the segmentation, what are the most important details that you want to accurately extract and what errors are tolerable.

First of all, if you just need visualization then you don’t need to segment the image but you can use volume rendering (raycasting), because the contrast agent already has somewhat distinctive intensity range. It is much easier to set up a beautiful volume rendering (you need to tune 1-2 threshold values) than creating an accurate binary segmentation. Setting up an endoscopic visualization (in that the lumen of the intestines is transparent so that you can fly through) is fairly straightforward by editing the volume rendering transfer functions. You can also mask out irrelevant regions from the segmentation before volume rendering with a very rough approximate segmentation to reduce clutter (e.g., threshold, keep selected island, grow by a small margin, use to mask volume).

If you need segmentation: Since the images are contrasted, thresholding may get you usable results. The challenge is that if you use a too small intensity range then the region will have lots of holes inside; but if you use a wider intensity range then the segmentation may go through thin walls of the intestines. In 3D Slicer’s Segment Editor module, you can use Threshold effect to highlight the contrast-filled region in the image (make the intensity range large enough to completely fill the contrasted region) and then choose Use for masking (anything outside will be excluded from the segmentation). This mask may include various image regions, so use Paint effect to paint seeds inside the intestines, and paint with a different segment in all other regions that you are not interested in. Then use Grow from seeds method to grow complete segments from the seeds. After Grow from seeds is initialized, you can paint further scribbles to fine-tune the results. The main challenge is to prevent intestines wall being added to the intestines lumen segment (because that would result in holes that connect two different sections). You may be able to fill the holes by adding more seeds inside walls or change the Editable intensity range. You may also try to preprocess the image using anisotropic filtering to make the contrast filling more uniform, without blurring the boundary between lumen and wall of the intestines. There are many other tools and options, but without knowing the clinical task it would be too much to discuss them all.

If you are willing to invest time into creating many segmentations and interested in “AI” based segmentation tools then you can use MONAILabel and its 3D Slicer plugin to segment data sets and train a model.

But I don’t know if rasterization can be done using SimpleITK.