So i followed the tutorial I found here: http://simpleitk.readthedocs.io/en/master/Documentation/docs/source/building.html#recipes-formulas-short-cuts to build the latest unreleased SimpleITK version.

I downloaded cmake and I made a map in the parent folder. I changed my path in the command prompt to this parent folder. I then used the cmake …\Superbuild command to build SimpleITK. This didn’t work. I searched for hours online and found some half solutions but none was explained decently and I can’t get it to work. The error that I receive is the following:

image.png1754×97 10.3 KB
I’m sorry that it’s an image but I couldn’t copy paste from my command prompt. Any help is greatly appreciated.

EDIT: I tried to use the gui and the microsoft visual studio 2010 tool, but than i get: ` C:/Windows/Microsoft.NET/Framework/v4.0.30319/MSBuild.exe

to get the value of VCTargetsPath:

What you might need is to run cmake ../SimpleITK/SuperBuild (better yet, all of the commands) from a Visual Studio command prompt, usually found on the start menu under Visual Studio\Tools.

Hi all, i’m sorry i’m getting another error now. I’m just confused where I should do what

Is this processus correct?

Yes, overall, that is generally the correct approach.

A few details to watch out for:

Hi Matt, in your example simpleitk-build is not in the parent folder of
simpleitk so this is not necessary? I’ll try a shorter path as soon as I
can find a place to charge my battery.
Thanks!

I’m getting this error:

I have Visual Studio 2015, with this version it is called VS2015 x64 Native Tools Command Prompt. It sets the path to C++ compiler cl and other compiler-related tools. Just running this from an ordinary command prompt usually does not work.

Instead of the command prompt, you might use CMake-GUI, and select appropriate VS version when clicking Configure the first time.

Thanks for the reply dzenans, I downloaded the latest version of visual studios (2017) and I ran it from the VS command prompt. However the result is the same: 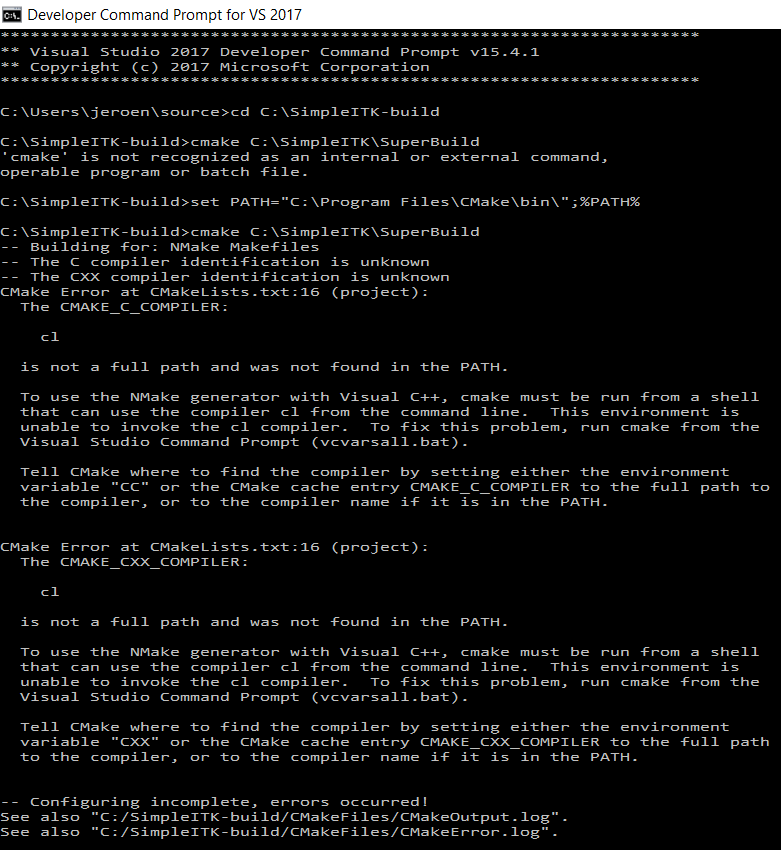 CMake always seems to find one of my Visual Studios compilers. Have you launch the VS GUI? Perhaps that will do some user configuration needed for your environment. Then reboot to get your environment changes.

Those same steps work on my computer. When you installed VS2017, did you chose component “Desktop development with C++”? If not, that would explain your problems. If that is not the issue, which version of CMake are you using?

To check whether path to C++ compiler has been set, type cl /? in VS command prompt. Here is the output on my computer:

‘cmake’ is not recognized as an internal or external command, operable program or a patch file.

This may be caused by CMake trying to create NMake Makefiles before, so it will try again. To address this issue, remove the contents of C:\SimpleITK-build before running cmake again.

If C:\SimpleITK-build is already clean, then explicitly specify what CMake should generate with the -G flag, i.e.

Thanks Matt, I could indeed resolve this issue this way

Now I’m just still stuck on the C++ compiler not being found.

@blowekamp I launched the GUI, but I’ll reboot later (takes a while and i actually have to study for an exam) but it certainly has no immediate effect.

@dzenanz I don’t remember whether I chose that, is there a way to check this? The output I get is that it isn’t found:

This is what I got from the VS cmd prompt:

I suggest to restart your computer. To check which components you have, run “Visual Studio Installer” and click “Modify”. On my computer it is located here: C:\Program Files (x86)\Microsoft Visual Studio\Installer\vs_installer.exe

Hi guys!
Sorry it has been a while, but i had to focus on a couple of other things before continuing my building quest. You guys were right, I accidently installed a Visual studio version without the developper options. After adding the developer options to my Visual Studios installation and running the cmake command from the visual studios command prompt I advanced! So thanks a lot!

You might have noticed the usage of ‘advanced’ and not ‘worked’. This is because I got a new error :). Any ideas for this one:

image.png799×348 20.1 KB
The original question of this post is actually solved, should I make a new one?

Thanks for all your help

Found the solution myself, i lacked the ‘git’ program apparently

Most of the information you want us to add actually appears at the top of the page you referenced, prerequisites section. Still, this shows us that we need to point to that section from each of the sub sections.

Your feedback is helpful, so don’t stop “complaining”, you are helping us improve the documentation and its layout for everyone’s benefit.

This pull request should address the issues:

I still have a final follow-up question on this topic

It has been a while since I first had some exams. I thought I completed the quest because I builded the package succesfully. However the package still has to be installed in python. I followed the tutorial further down and I found the necessary commands. However, when I execute them I get the error that ‘setup.py’ doesn’t exist. Which is indeed the case, but I did find ‘setup.py.in’. I found it in the source folder but I guess it should be in the build folder, but it isn’t. There’s nothing in the SimpleITK-build\SimpleITK-build folder.

Here’s a screenshot of what happens when I try to run the commands as explained in the tutorial:

As always all help is appreciated