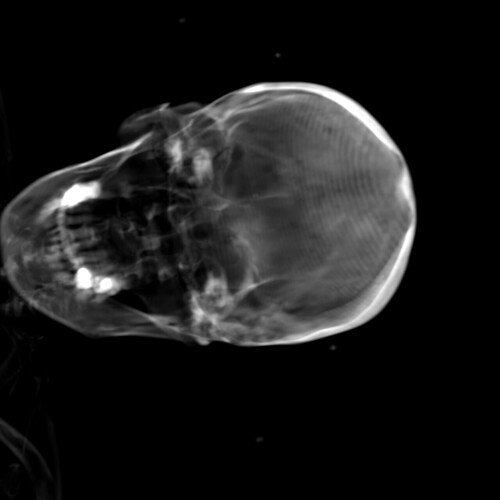 The RayCastInterpolateImageFunction does not support this functionality. The threshold setting is designed to ignore values below the given setting, so allows you to ignore soft tissue, but not bone when doing the summation.

You can:
a. Modify the RayCastInterpolateImageFunction to support the functionality you want.
b. Create two volumes via thresholding prior to DRR generation, bone and soft tissue. Then generate a DRR from each of the volumes without the need to use a threshold during DRR generation.

Thank you very much! I will try! 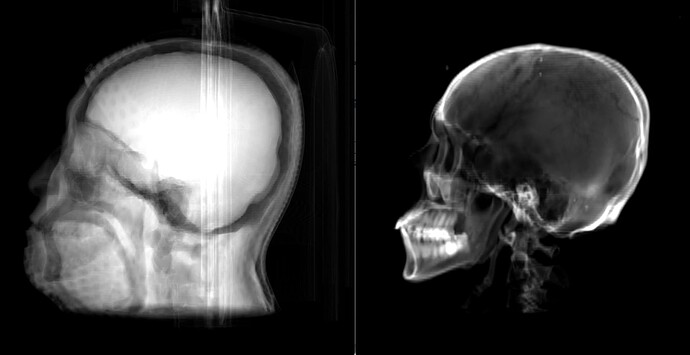 If you are asking if the DRR on the left is correct in the sense that it only displays soft tissue, then yes. Wherever you had bone in the CT you ignored it, so it is equivalent to an object comprised of soft tissue and water (water has a HU of zero which is what replaced bone, assuming you didn’t replace it with air, -1000HU, you can replace it with white-matter ~25HU or gray-matter~35HU).

The question is whether this DRR is more useful for a specific task. You can try various rendering approaches.

As I believe you are working on 2D/3D (projective-image/volume) registration you need to consider:

The interplay between the two components is what determines the accuracy of the registration and the time it takes to perform it - this is the bottom line, not if the mapping of the 3D volume to a 2D image was an accurate simulation of the physical imaging process.

Thanks for your reply! It’s very helpful!