I am trying to run DicomImageReadWrite.cxx example mentioned on ITK website on Visual Studio 2019. I have compiled ITK with CMake Visual studio 2019 compiler.

But I am getting following errors :

I have provided include files and linked all libraries also.
I don’t understand what these errors are about?
Kindly provide the solution to solve these errors.
Thanks in advance.

It looks like you are not linking Ws2_32.lib. Are you configuring your example using CMake? If so, can you share your example’s CMakeLists.txt file?

I installed ITK with CMake using Visual Studio Generator in debug mode.
But I am not configuring my example using CMake. How to do that?
I just copied code from ITK website and running it in Visual Studio. In properties, I linked include and library files.

What is this Ws2_32.lib? Where can I get that? And do I need to link into linker?

Ws2_32.lib exists in many places on my computer: 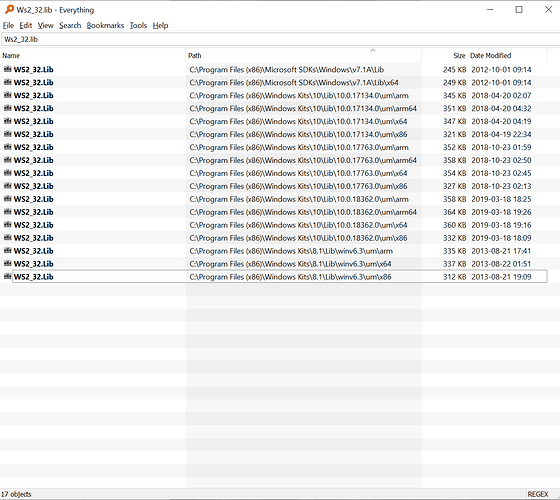 But you should not be dealing with that. Here is how to configure an example using CMake. Just replacing HelloInsight.cxx by DicomImageReadWrite.cxx should be enough. If you run into issues, let us know.

thank you for the details.
I configured DicomImageReadWrite.cxx example according to the link you provide.
But I don’t understand the last step which is “to run the executable (in my case it should be ./DicomImageReadWrite)”.
Should I run it in command prompt? Like other steps.
If I did, it is showing wrong command for ‘.’
How should I do it?

And also, for this example it needs input dicom image. So should I put my dicom image in build directory or other else? and while executing it, it needs 4 arguments. How to give it? with .dcm extension?

and is there no other way to open my program in Visual studio and run it there only, so I can debug my code there.
Please provide me answer for it.

Of course you can run it in Visual Studio. Set the Command Arguments property: 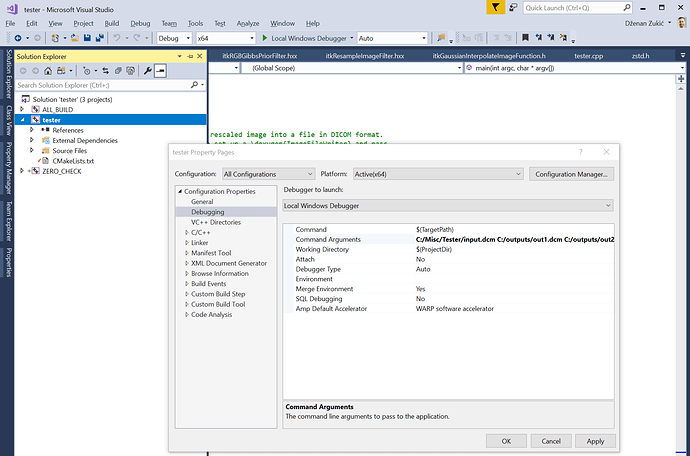 If you provide a full path to the input, it does not matter where it is. With filename only, it needs to be in the Working Directory. And yes, file names should be given with extensions.

So when I run the program it is showing following box. 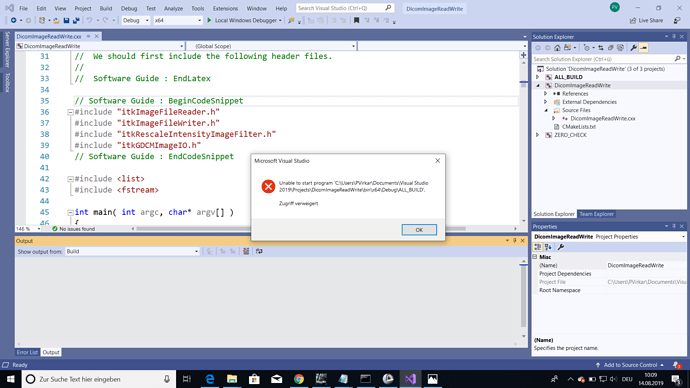 In both cases my input image is in working directory.
Sorry but i don’t understand anything.
Could you please provide me step by step procedure?

And also last time I was working with Linux and all these ITK programs were working fine and after running any example I was getting output image showing immediately. But in windows, will it show my output image directly or it will only save it in that particular directory ? and then i have to open it in dicom viewer?

This example just writes the outputs to disk. You will need to load them in an image viewer (e.g. Slicer). The same would have been true on Linux, given the same source code.

In my first case, I did as you said. But when it is showing following debug error.
It saying “DicomImageReadWrite.exe has triggered a breakpoint.”
what is meant by it? And how to solve it? 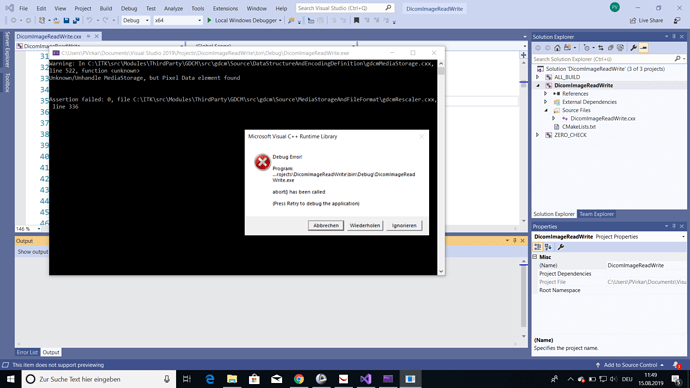 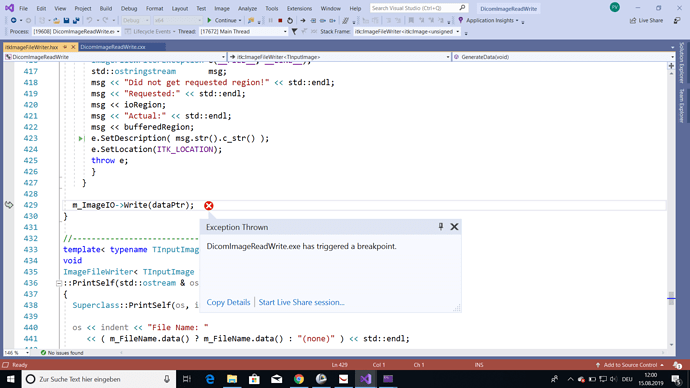 And I also want to ask you that, is it always need to load output in an image viewer? Is there any way to show it directly after running the example?

The exception means that GDCM (part of ITK) cannot read the DICOM file you are trying to read.

To avoid a separate viewer, you could try QuickView.

But why is it not reading the DICOM image?
what should I do to solve this error?
I tried different examples. but none of those examples are working.
I am using code which is mentioned on website.
Last time it was working with my Linux system.

Please let me know the solution.

But why is it not reading the DICOM image?

Can you start a new forum discussion with this topic? This has nothing to do with LNK2019 error in ITK DicomImageReadWrite.cxx example.