How to install ITK in windows

But after ALL_BUILD in VS2019 I am ending with the above errors.

That is a known issue with VS2019, which has been resolved in 5.1b01 and 5.1rc01. v5.1rc01 was tagged only yesterday, it will be some days before all the packages are created. If you need the pre-build packages, use 5.1 beta1. But since you are compiling yourself, I suggest you to use the yesterday’s 5.1 release candidate 1.

If v5.1rc1 Python packages are desired, they have been uploaded and can be installed with

We will finish the other release items and finalize the release next week.

I am expecting to use C++ codes so python is not what I am exactly looking for.

which I think can be combined as git clone --branch v5.1rc01 https://github.com/InsightSoftwareConsortium/ITK.git

Thanks.
And are all the other installation process the same?
VS2019, CMake and everything?

Yes, everything else should be the same. Moreover, if you previously used git to get the source code, you should now be able to do a git pull, do an incremental build in Visual Studio, and it should compile successfully.

I tried to install but getting the following error: 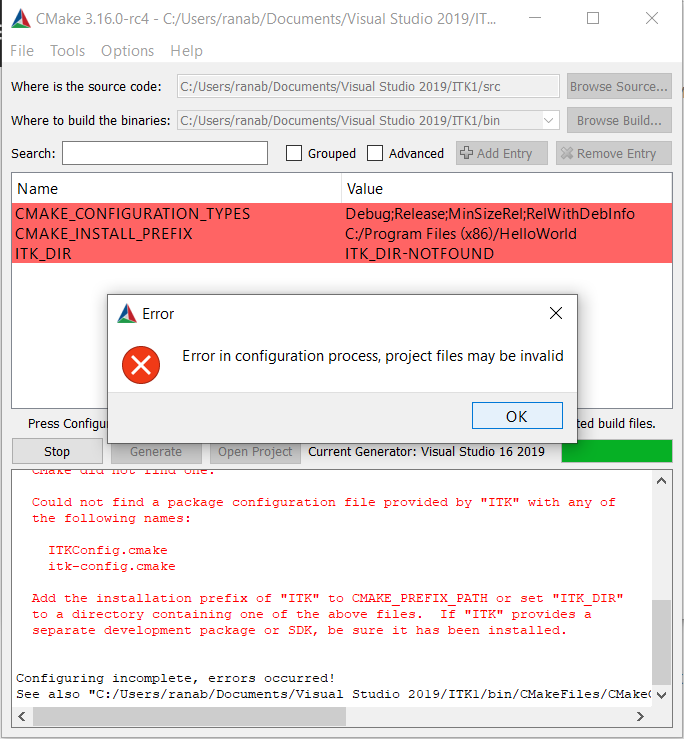 Is it somehow related to environment path?

I was trying to run the hello world installation example.

You need to set ITK_DIR to the build path (or install path) of ITK. The correct folder has file ITKConfig.cmake in it.

Hi,
I solved it. Forgot to mention. It works now.
Thanks a lot.