Error in ITK compilation with wingw32-make

I want to create an application to read and process DICOM image files.
I want to use ITK + VTK + Qt.
I have not any problem with Configure and Generate ITK with CMake.
When I start to compile ITK bin files after generated with CMake all seems go well until 90% when stops an shows the message that you can see in attachment.

I would like to use ITK in my project. My project is about Stereotactic Neurosurgery Planning System for the treatment of movement disorders (Parkinson’s disease).
Thanks. 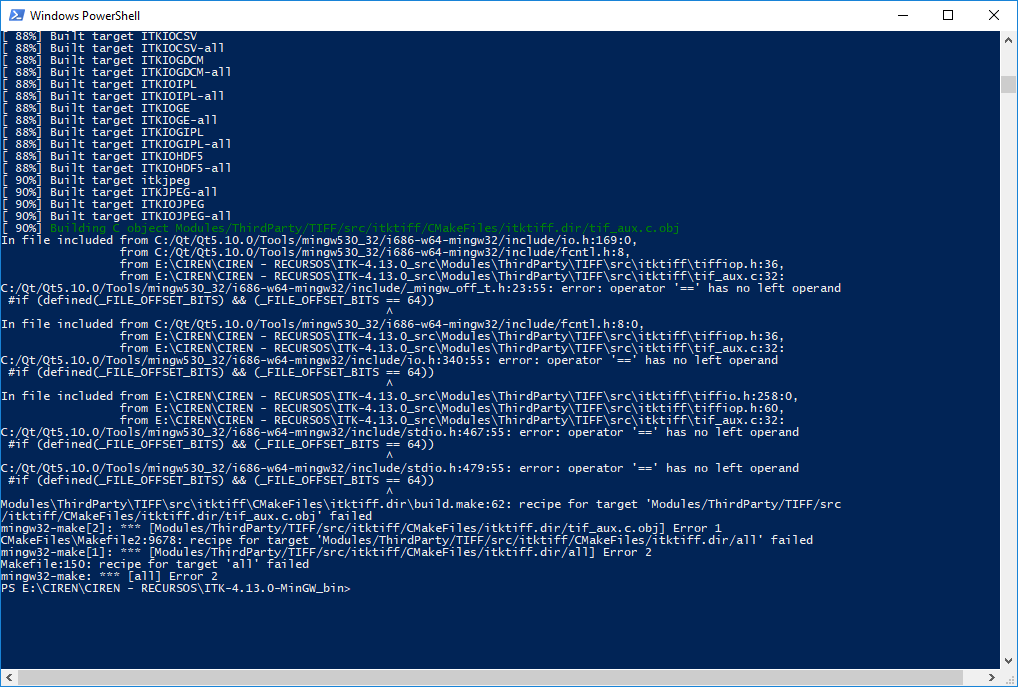 mingw is considered an exotic compiler, and while its build status is tracked it is currently failing. In other words, ITK does not compile properly with mingw.

For Windows it is best to use Visual Studio 2015 or 2017, both of which are free for open source projects etc. If you must use an open source compiler, why don’t you try clang?

Thanks a lot DZenan Zukic, I’ve spent hours on this. I want to use ITK but I am hesitant between using Visual Studio or Qt. That’s why I tried to compile ITK using MinGW, because Qt uses it. I have never used clang. I take this opportunity to ask you if the result of the compilation of the ITK libraries using Visual Studio can be used in Qt, because with Visual Studio I compiled and did some tests and everything worked fine. Thanks again

Qt can definitely be used in Visual Studio. Precompiled Qt versions use VS on Windows.

You may also be interested in MXE which ships the mingw-w64 compiler but also packages for the compiler like ITK, VTK, and Qt. However, it runs on Unix-like systems.

This build issue has been addressed in ITK Git master and release-4.13 branches:

changed 1 files with 1 additions and 1 deletions.