I’m building an image registration framework for MRI data that requires combination of numpy and ITK. I recently realised that the indexing in ITK arrays and numpy arrays are swapped from [x,y,z] to [z,y,x] (from this forum thread). So in order to fix this I thought I’d apply numpy.tranpose before creating the image, but it turns out this has no effect on the generated image. I know that it is not recommended to modify the data like this but I want to make so that translations estimated in “X” in ITK corresponds to the 0th dimension of my numpy array (if there is a better version to do this I’m all ears).

To demonstrate the issue with an example: I have a Shepp logan phantom that I have generated using Sigpy here called phan

If I compare the numpy arrays I can see the effect of the transpose: 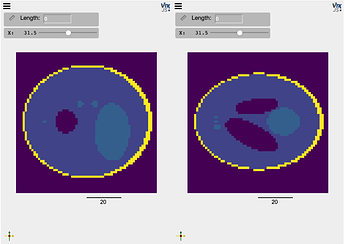 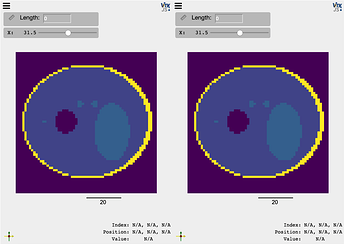 My thought is that this has something to do with the fact that numpy is returning a view of the array and not a deep copy, but I’ve tried creating a copy of the array before producing the ITK image but with the same result. The only way I could get it to work was to create a 4D array which I slice in the transpose function as 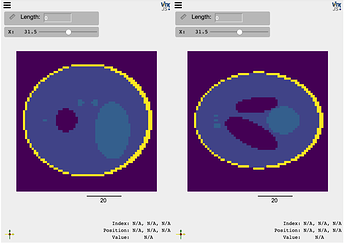 I feel like there is something I’m missing here in the way I’m creating the images, any help is very welcome.

Thank you very much!

Yes, most pain will be avoided by using the natural NumPy array indexing, which most closely corresponds to [z, y, x]. This is because the default indexing order of NumPy arrays is C-order as opposed to Fortran-order, that is, the fastest-moving index, i.e. the index that data is arranged next to each other in memory, is the last index. See also the scikit-image notes on this topic.

Calling .transpose() often does not actually change this order of data, it just changes the NumPy indexing order. Check the value with .flags

Note that when used in ITK, the NumPy array is consumed in C-order form.

So, the data can be indexed in its natural order or it can be changed with np.flip or other functions instead of np.transpose.

I faced this problem as well, converting a non-standard [i, j, k] (contiguous order) to [k, j, i] (contiguous).
I ended up with this solution, in case anyone is interested in the future (myself included

einsum has an order parameter, but is ignored, always returning a F ordered array.